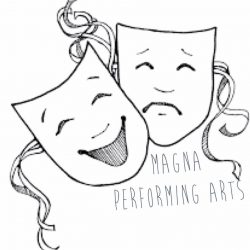 An Experience in Performing Arts for the Community

How it all began: In 1979 a keen group of would be actors took to the stage in the pantomime They have gone on to expand their enthusiasm for the stage ever since by performing not only an annual pantomime but every theatrical experience they can.

What they do now: Always keen to be challenged by what they do their repertoire includes musicals, comedy , classical drama, Shakespeare, modern plays and theatre of the absurd. They have many awards for original plays and  have a writer in residence. Many of the original members still play an active role alongside the younger talent.They have performed at the Courtyard Theatre, studio and main house, also at Bromyard Theatre, Whitecross School  and mainly now at the Powell Theatre, Church Street, Hereford.

Young Magna: The youth group was properly formed in 1982 and has produced some talented performers some of whom have stayed with the group or returned as adults. It is for young people aged between 8 and 16 years. The aim of the group is to learn performance skills in a positive and fun way. They perform a showcase each year at Credenhill Community Hall, as well as performing alongside the adult group in the annual pantomime and at least one other production each year. They put together scripts for performance in workshops,learn music skills and have an active dance group. Many have gone on to make a career in the theatre, both performing and working backstage or on lighting design.

The Weekly Sessions: Rehearsals and Workshops take place in Credenhill Community Hall, a large , airy well lit space, complete with  stage curtains, and technical equipment including a laptop , P.A.System,and stage lighting. Magna meets each Tuesday from 7.30p.m, Young Magna each Sunday from 2.30p.m.to 5p.m.  and is led by a teacher of Drama and Comparative Speech, parents play a vital role and work with the group on a rota basis. Extra rehearsals are held on Fridays 7.30p.m.Contact us via our F.B page or magnadrama@btinternet.com or 07954081999 for details

WE ARE A NON-PROFIT MAKING COMMUNITY GROUP

WE WELCOME ALL NEW MEMBERS

Each year both groups perform in our Annual Pantomime and then the adult group do a further 2 shows and the Youth group putting on a showcase each year.
Each one of our performances is Affiliated by Noda, please follow the link for previous show reports: https://www.noda.org.uk/societies/magna_drama_group

Hire the Hall for your event!